“Back before the Middle Ages, the Arabs played a game using little numbered cubes, called az-zahr — meaning the die. The game showed up across the Mediterranean in France, where it was named hasard, then jumped the English Channel to England some time before 1500 AD where it was given the English spelling of the same word, hazard. The roll of lowest value in that game was called crabs. The French, trying to be amiable, adopted that term from the English, but spelling it the French way as crabes. In the early 1700’s, the game crossed the Atlantic to the French colony of Acadia, where a surprise awaited it and those who played it.
Request A Quote 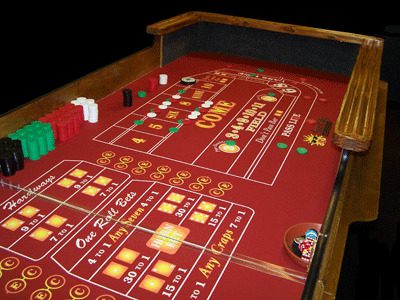 Blackjack, also known as twenty-one or Pontoon, is one of the most popular casino card games in the world. Much of blackjack’s popularity is due to the mix of chance with elements of skill, and the publicity that surrounds card counting (keeping track of which cards have been played since the last shuffle). Blackjack’s precursor “vingt-et-un” (“twenty-one”), which originated in French casinos around 1700, did not offer the 3:2 bonus for a two-card 21.
Request A Quote 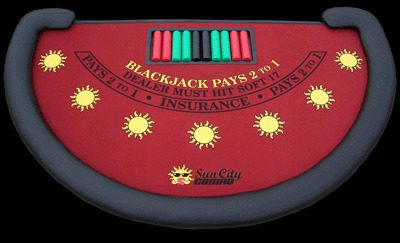 The history of poker is a matter of some debate. The name of the game likely descended from the French poque, which descended from the German pochen (‘to knock’; also means ‘to brag’ in Dutch). Yet it is not clear whether the origins of poker itself lie with the games bearing those names. It closely resembles the Persian game of as nas, and may have been taught to French settlers in New Orleans by Persian sailors. It is commonly regarded as sharing ancestry with the Renaissance game of primero and the French brelan. The English game brag (earlier bragg) clearly descended from brelan and incorporated bluffing (though the concept was known in other games by that time). It is quite possible that all of these earlier games influenced the development of poker as it exists now.
Request A Quote 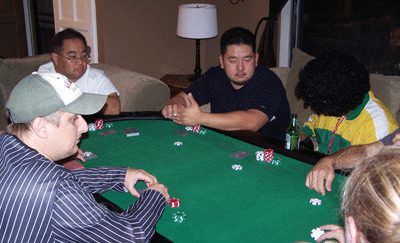 Pai Gow is a centuries old game that originated in ancient China. It was a bit complex and played with tiles that closely resemble dominoes. In fact, many times they were called dominoes, even though they’re not. Variations of the popular game started appearing in China in the 1800’s. Not a whole lot is known about who exactly invented the variations or when each one came into existence. What we do know though, is that the game known as Pai Gow Poker has its roots in the original Pai Gow tile game, but is not exactly the same. It is a fusion of both Pai Gow and traditional Poker.
Request A Quote 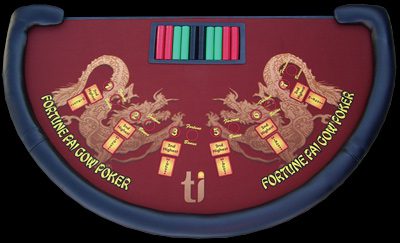 Let It Ride is one of the newer Vegas games invented by Shuffle Master in 1993, who owns the copyright to both the name of the game and the logo. Let It Ride is a casino variation of poker, played against the casino rather than against the other players. The game’s relatively slow pace and the chance to pull back two of the three bets has made Let It Ride popular with older players and table game neophytes.
Request A Quote 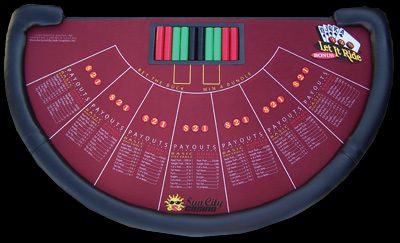 This game originated in the Caribbean Islands on the cruise ships that travel the surrounding waters. Since the game does not offer the best odds and percentages for the player, when the game was introduced to American casinos, a progressive jackpot bonus was added to excite and attract more participants. Although this bonus does not greatly increase the appeal for most players, it definitely added to its initial popularity and perhaps even accounts for its lingering demand in this day and age of casinos, both on- and off-line. The game evidently maintains a wide following throughout the world, possibly in part to its glamorous and exotic title.
Request A Quote 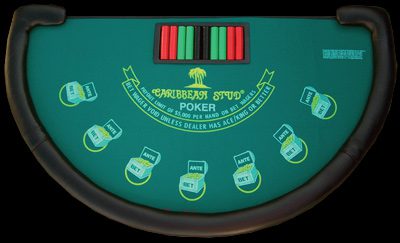 Three card poker (also called tricard poker) is a poker-based game that has recently become popular in American casinos. It actually consists of two separate games, Pairplus and ante-and-play. The players can choose to play either or both of the games.

Pairplus is a simple bet on the cards with a payout for all hands of a pair or better. For ante-and-play, the player places an ante bet before receiving his cards. With this information, the player can fold his cards and lose the ante bet, or raise by placing out a bet of equal money to the ante bet. To win, the player’s hand must beat the dealer’s hand. 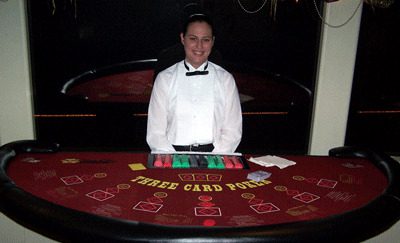 Triple Shot Bonus is a new three-game table game. It is three games in one: War, Blackjack and Poker. The three bets are independent, so the player can bet any amount on each one, subject to table limits. Players will place their bets at the start of each round and will win or lose each game individually. The three games are played in succession, using the cards from the previous game to complete the next game.
Request A Quote 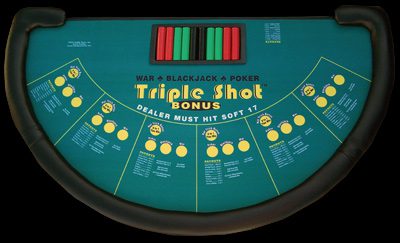 Double Exposure Blackjack (also called “See Thru Blackjack”) is a variant of blackjack in which both the dealer’s cards are revealed to players at the start of the hand. Knowing the dealer’s hand provides players significant information, and without rules, modifications would be advantageous to the player. The main rules change to provide the casino with the advantage: (1) Even money payouts on blackjack (compared to 3:2 at normal tables) and (2) Ties lose (compared to pushing in standard blackjack). Other rule changes also exist to the detriment of players. Certain tables restrict doubling down and splitting, and do not allow doubles after splits. The game was invented by Bob Stupak, former owner of Vegas World and Stratosphere casinos. It is still currently being played at the Stratosphere.
Request A Quote 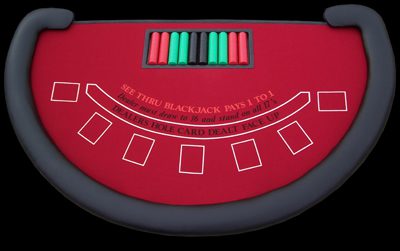 Wheel of Fortune, also called a “Money Wheel” owes much of its heritage to traditional carnival prize wheels. Prize wheels debuted at American carnivals in the late 1800s, and they became so popular that giant wheels offering fantastic prizes became major attractions at some amusement areas.

The prize wheel, in turn, has its roots in the days of chariot warfare. After a battle, victorious soldiers often contested over the spoils of their fallen enemy. Trying to avoid further bloodshed among their troops, commanders encouraged using games of chance to settle disputes. Upended chariots strewn across the battlefield served this purpose nicely – a spear was thrust into the soil next to the wheel to serve as a reference point, and each contestant made his mark on the rim between two spokes. The wheel was given a good spin, and the soldier whose mark settled closest to the spear won the prize without a fight. 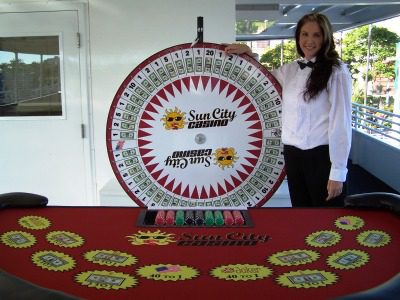 In 1778, the French had their own version of the lottery called Le Lotto. This led to the development of the classic game of Lotto. The game consisted of cards which were divided into three horizontal and approximately nine vertical rows. The horizontal rows had five numbered squares and four blank squares which were randomly arranged. The vertical rows had numbers 1 to 90 grouped on separate rows of the card. The cards were all unique. The game also consisted of chips numbered from 1 to 90. Each player received a single card. The caller would draw a number and call it out aloud. The players would then proceed to covering the numbers if they appeared on their card. A player needed to be the first to cover a horizontal row in order to be declared the winner.
Request A Quote 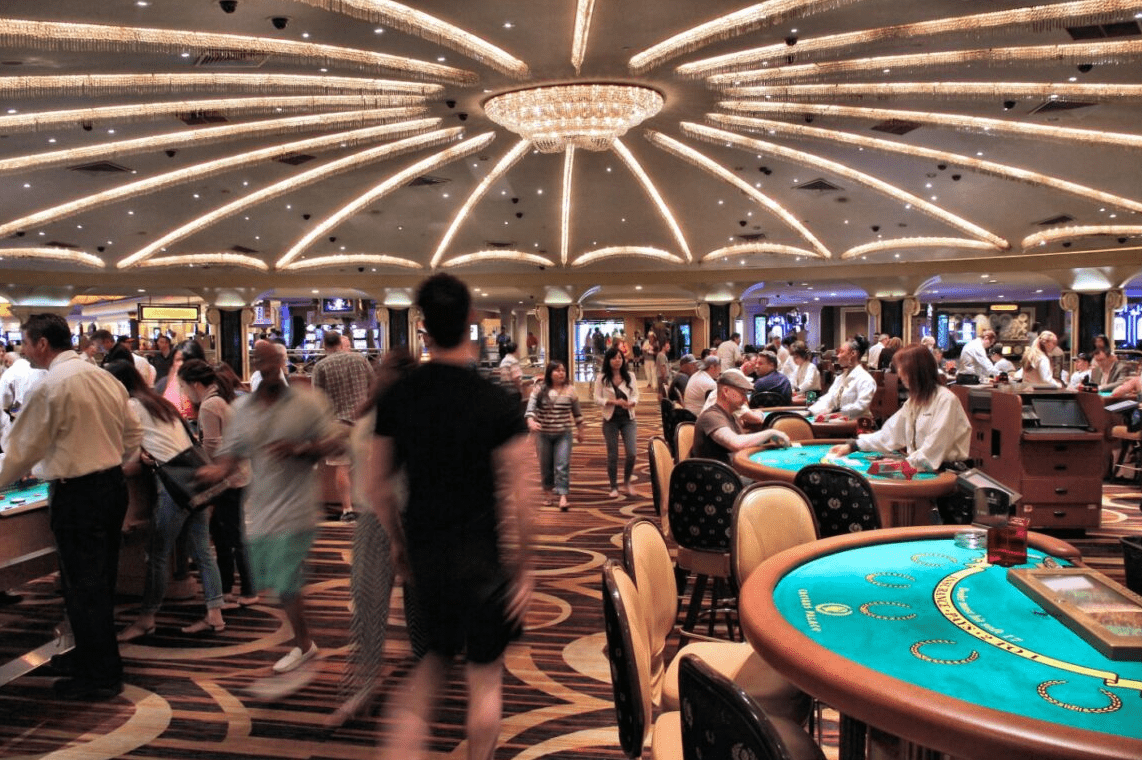 The first form of roulette was devised in 17th century France, by mathematician Blaise Pascal. He was inspired by his fascination with perpetual motion. In 1842, Frenchmen François and Louis Blanc added the “0” to the roulette wheel in order to increase house odds. In the early 1800s, roulette was brought into the U.S., where to further increase house odds, a second zero, “00”, was introduced. (In some forms of early American roulette the double-zero was replaced by an American Eagle.) In the 1800s, roulette spread all over both Europe and the U.S., becoming one of the most famous and most popular casino games. Some call roulette the “King of Casino Games”, probably because it was associated with the glamour of the casinos in Monte Carlo. (François Blanc actually established the first casinos there).
Request A Quote 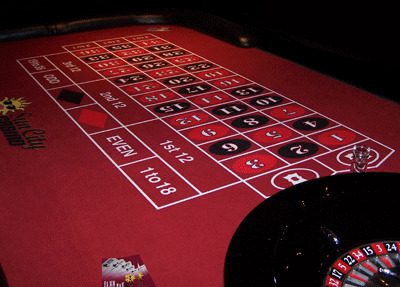